Someone contacted us recently with a good question they are concerned about; Why would the #CityofOcala keep one of their department heads after they were charged allegedly with driving under the influence, domestic battery, as well as false imprisonment (in 2019)?

Now I know we all have bad days; BUT if someone is the type of person to punch a woman in the face multiple times and hold her hostage while driving under the influence down an interstate/highway (according to the source/report linked below), how would any normal employee feel safe with someone that violent (according to the report) being their boss, ironically someone in a Human Resources position that interacts with all employees, new and old? Can someone at the City of Ocala please explain this to the taxpayers of Ocala who pay this guy’s salary as well as the salaries of the people that chose to keep him in a management position? Why wasn’t he terminated to keep us from having to pay his salary since 2019? Now, I have to wonder if there are any city employees out there that may have been mistreated by him at work over the past couple years, if so, please contact us. Thank you for your time and I look forward to your response so I can pass the information on to the original requestor.

UPDATE: Apparently, the DIRECTOR OF HUMAN RESOURCES AND RISK MANAGEMENT only received a 5-day suspension without pay. Again, I wonder if any employees have been assaulted by him at the city since they decided to keep a known violent person in a management position. I wonder what legal rights an employee would have to sue the City if so… If you feel you have been mistreated by Human Resources or Risk Management in any way, you should reach out to a lawyer for sure. 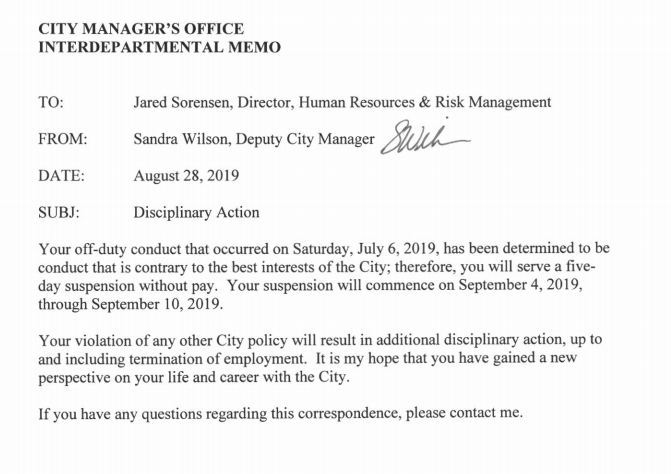